Absolutely loving it so far and I’m excited to do the MG barbatos after this! There’s still a lot of cleaning up to do on some of the details but for now it’s coming together great. The arm parts are all primed and ready for their base coats, and the claws look great with primer on them. I’ll show those off more once they’re painted and all done up. Paint for that will be here on Wednesday and I’ll be putting the head and chest together soon after that. Should have them posted here next weekend!

I hope everyone out there had a good holiday season! Let’s get back to it!

I put in more work on the HiRM Wing Zero and am really glad I did. The color on the legs look fantastic and really draws the whole thing together for me. It’s still not done because I need to replace all the aforementioned broken/missing parts. I’ll still take some pictures of it, flaws and all because I do really like the way it turned out. I hope the above pictures will tide everyone over while I take my sweet time repairing and repainting it.

The Amazing Astraea is coming along well. I’ve got the placement of many of the extra GN condensers figured out as well as having the entire upper body almost ready for painting. I’m pretty excited about this one and will be making a push to finish it next. Hopefully I won’t need to buy even more Exia lineage RG kits to get there.

My wife and I started watching Iron Blood Orphans so naturally I had to get a kit from that series. I picked up the Barbatos Lupus Rex from the hobby store across the street as well as a few new tools to ring in the new decade. 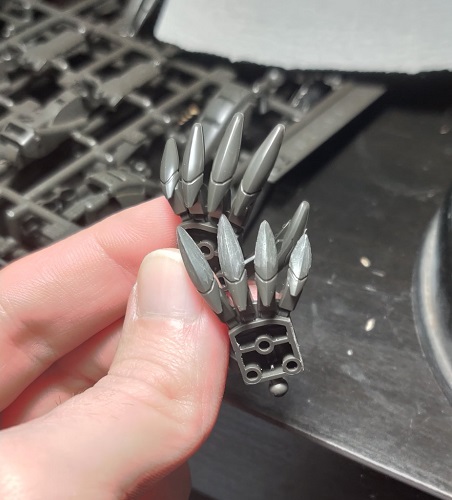 I’ve want to improve more as a modeler and for 2020 I’d really like to try to develop my skills more. For starters, the Rex is practice for sharpening v-fins and other parts. I’m pretty happy with the results I got for my first try. I’ve got some cool plans for the rest of the Rex, least of which involves getting to try out a new brand of paint: Gaianotes! We’ll see what kind I wind up focusing on for the next post.

The ‘for now’ is extremely operative.

There’s still replacement parts, panel lining and some extra coloring to do on this kit.

I think I’m going to add some color to the knees and to the parts right behind them so the legs are so plain to look at. I might add some gold decals from the Banshee ver. Ka on the red and orange parts as well but the jury is still out on that one.

Gonna be busy for the holidays but I’ll be back on the grind for this after this weekend after all since I want it to be finished in it’s proper form. That gives me more time to put my thoughts on this kit together too. I don’t think it’s anywhere near as bad as others have said even if it is a far cry from being perfect. It still outclasses both the MG and PG and in some ways, the RG. I’m pleased with it as a model kit and am probably going to pick up the HiRM Wing ver. Ka at some point down the road as well.

Made plenty of progress on this since the 20th: 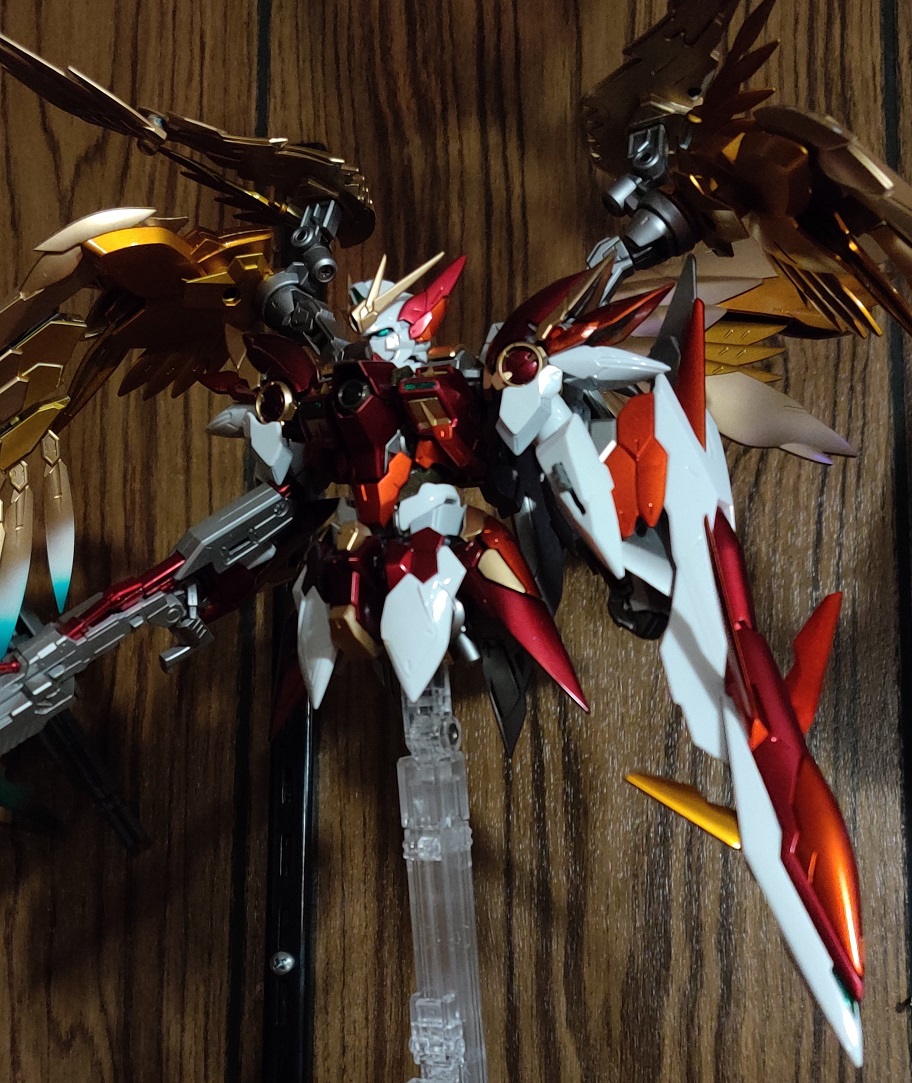 But wait, I got even more done:

Glad I started with the wings, weapon and shield. I still need to take this apart and paint all of the grey armor parts but with the holidays fast approaching I just wanted to have the kit together and up on a stand so I didn’t have to pack it up and risk losing more parts. Of which there are many because I managed to lose 3 parts for the buster rifle, 2 for the shoulders and managed to break one of the parts on the hip frame. I’ll likely be picking up an MJH Wing Zero Custom to pilfer some replacement parts from.

Once it’s done, I plan on taking pictures of the kit and then taking another small break before I launch full tilt in to working on the HMM Liger Zero “Knifecat”.

So excited to see the head and torso complete! I’m really glad I started with the wings and weapons because these candy coats are e x h a u s t i n g.

Still plenty of panel lining to do on the white parts of the head. Too excited to see it all together. The chest ran in to a few issues- I had to re-do the two main chest parts that the gold vent and clear green parts go in to as they got chipped the first time around. Thankfully, isopropyl alcohol rubbed the marred layers right off and priming and painting them a second time went off without a hitch. Super happy with the way the colors work together here! Just the right amount of pale gold and orange. I went with pale gold over candy yellow for the chest vents and went with candy orange instead of pale gold for the parts under the chest vents and I think those choices work very well with the kit.

Still need to put the LEDs in the wings. It’s daunting. But they’re painted and they sure do look nice, don’t they?

I already know it’s going to cost me some chipped paint but damn if I’m not excited about putting this in to it’s neo bird mode. The shield and rifle turned out beautifully (though the rifle has some imperfections where some nubs used to be- I coulda cleaned them up a little better and might still go back to touch it up more.)

Everything so far! What do you think? I don’t have too many opinions about the kit itself yet, though one of the bits on the side of the head is already showing a habit of falling out if I bump it the wrong way. The main wings could be a little tighter too but we’ll see how they hold once I’m trying to pose the kit. Maybe those feelings will change once I get the arms and waist and legs further along, we’ll see!

Have to sand + repaint the wings. Alclad II primer and I don’t seem to get along so well, the finish was all bumpy and schmutzy. I switched to Mr. Surfacer 1500 primer did the rifle and shield in the meantime:

Very happy with how things look. I don’t think I’ll need to paint the white? Right now I’m not planning on it, I think the glossyness of everything actually fits well. I lost one of the A21 parts that go on the back of the rifle because I am a human disaster. Hoping it turns up, someone out there with a scrap HiRM/MJH kit wants to donate it, or I just cave and buy the MJH one for literally one tiny part.

Narrative tails for the Unicorn will be here soon! I am excited to be totally done with it. I need to redo the beam effect parts for the Hyper Javelin, they look terrible too.

I also have a fun kitbash that I’m working on: 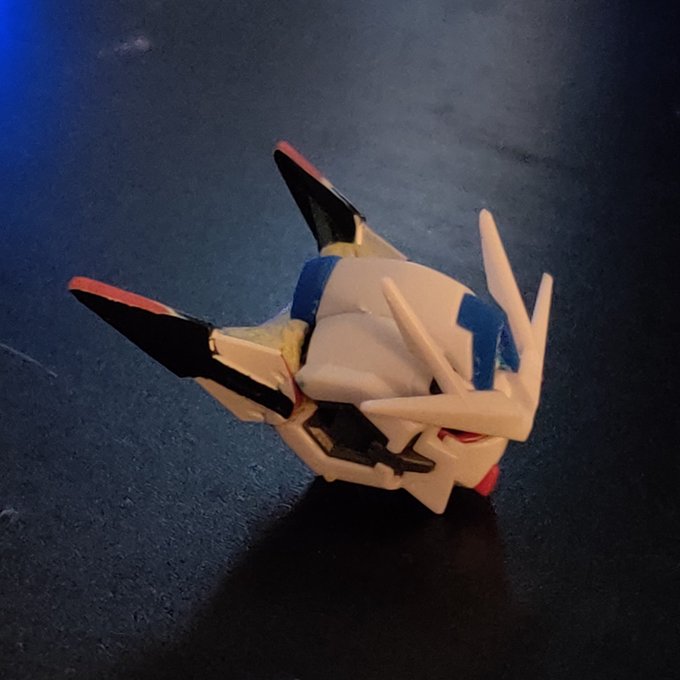 There’s a lot of work to do on it still. Gundam Build Fighters has been a lot of fun to watch if only for the fact it has been giving lots of motivation and inspiration to build.

Let there be light! WIP 3

The legs hands down required the most work to get everything working right. In fact, it’s also likely that I’ll have to do a little work to properly integrate the wires in to the frame so they aren’t showing and don’t get caught in the moving parts of the legs but that’s going to be some very minimal work. Let’s get to business.

Starting with the thigh, there had to be a pretty decent amount of space cut out here from what I had originally planned on. This area uses a 1.8mm LED versus the chip-sized LEDs I used for the majority of the kit with a second one back one the other side of the thigh. There’s a small issue where the 1.8mm LED’s wires interfere with the way the leg connects to the waist so that’s something I’ll have to work out before I put it together for the last time, likely by hacking off more plastic at the top of the thigh part.

The knee needed some trimming out to make room for the wires, as well as shaving down the top of the K22 part so the wires definitely had room to clear the part when it moved around when the leg was put in to destroy mode. I also cut down the back of the B2/B4 parts to make sure that when they slide back in Unicorn mode the wires weren’t pinched by them.

To fit the LEDs under this part I had to carve out some space on the front and back of the B6/B7 parts for the wire to go through but thankfully there’s a little natural spot on both areas that the led fits with no problem or further modification at all.

Modifying the foot was also really easy to do, just cut off the supporting slat on the L9 part and the corrosponding parts on B18 as well and the LED will fit in there without any hassle.

As a bonus I’m going to cover the backpack because it was literally two holes in to the back of it and that’s it. Now, back to the legs we end up with our end result:

The wiring still needs to be properly contained and run through the inside of the leg instead of just going where ever the hell it wants on the outside but as you can see everything works as it should! As a kicker I managed to get all of the armor parts gloss coated yesterday so I can start the decaling process AND eventual flat coat over the parts before final assembly. Due to the way this whole thing is going together I’ll have to have the parts finished before I put everything together hence the change in process. Additionally, I bought myself the RG Strike Freedom while I was drunk and the Proto Zero and Sazabi ver. Ka will both be on the way in December. There’s also the RG GP-01 FB, the OVA Banshee, the OVA Unicorn, the Full Armor Unicorn, four Jestas, the 3.0 RX-78-2 and two Valkyries sitting in a very large intimidating tower near my bed. Maybe while I pony up the 105$ for the LEDs on this thing I can work on one of those since I just dropped 450$ on a plane ticket to Texas this December.

Next update will probably be about decals and maybe starting the GP-01 FB since I need custom decals made up for my Valkyries.

It's a Gundaaaam!
Create a free website or blog at WordPress.com.